January 11, 2010
The Africa Cup of Nations 2010 kicked off yesterday with the opening match between host Angola and Mali. With Angola leading 4-0 at the 74 minute mark, the end result at full time was unbelievable. I don't think I've ever watched a top draw soccer match featuring such a comeback.

The tournament continued today with another shocker: Malawi defeated Algeria 3-0; and Cup favorites Ivory Coast were held to a 0-0 draw by Burkina Faso.

The matches are not televised in the U.S., but you can watch them all live at www.allsoccerafrica.com, click on the myafricanfootball banner or the Orange Africa Cup of Nations 2010 banner. If you like fantasy sports, participate in the African Cup of Nations 2010 Fantasy League here: create a team, pick eleven players and manage your team, let's see how good you are. I have my team squared away - Mobasababes - check out my players. And you can join the private league called All Soccer Africa (under the My Fantasy League tab). 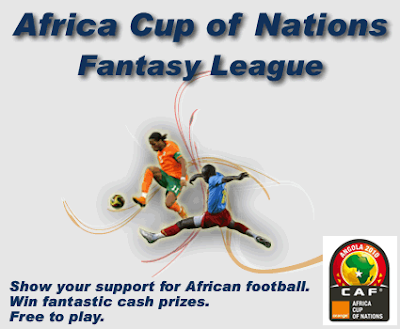