July 30, 2010
I could never squat by the roadside and relieve myself, in broad daylight, on sprays of grass in South Africa's breadbasket, the Highveld. No amount of decent cover could convince me to diversify the soil's fertility, to contribute tributary rivulets to fecal mounds of the animal variety scattered on the vast land; dried up, brown black swirls, no longer Swiss cakes to the bluebottle flies buzzing around.

I assure you; you would not come upon me crouching behind a clump of bushes as cars speed past on the N1 freeway towards Free State Stadium in Bloemfontein. I am not, after all, an African woman.

I be lady o. I no be woman. I be lady o. Market woman, na woman o.
I am an acculturated African lady.  And that van load of Nigerian soccer fans, men and women gathered on the side of the road, within inches of each other, in varying positions of relief; spouting, spurting, oblivious to the hundreds of World Cup road travelers, the men of course, having it easier than the women, was a disconcerting sight for me. 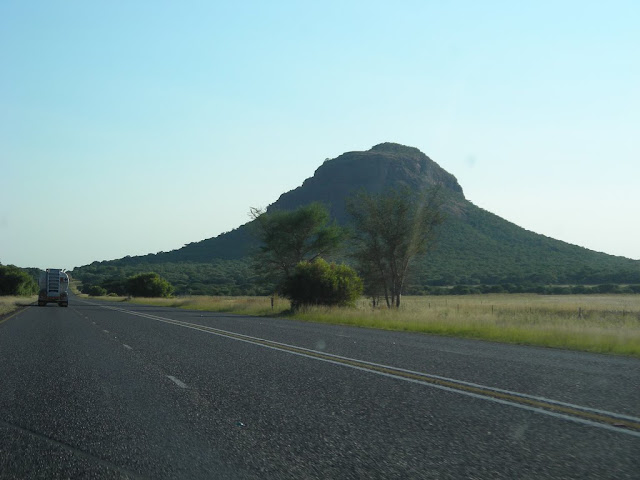 Photo credit (N1 Highway Johannesburg to Bloemfontein)
It was the morning of the Nigeria national team's embarrassing World Cup defeat to Greece (June 17, 2010).  Our convoy of cars had set out on a 400 kilometer road trip later than anticipated: thanks to our preeminent host, Kingpin and the attractive young bureau chief of a renowned media house in West Africa, his most recent house guest, who had arrived in South Africa without winter clothes, like an unprepared journalist.

In keeping with Kingpin's agenda and generosity, he ushered her into one of his luxury cars and drove her to a nearby mall to buy her a winter coat. The rest of us lowly travelers had no choice but to wait in his tastefully decorated living room and engage in pre-match discussions, doing our best to mask mounting irritation as minutes morphed into hours.

Two and a half useless hours later, they returned without a coat. And as if everything was playing out according to his plan, Kingpin ordered one of five domestic staff members to fetch a blanket from one of the extensive closets in the marble-floored mansion.  A cream colored cashmere blanket was produced without a struggle, the flourish employed in presenting it to her, glaring in its extravagance.

Kingpin, our freedom fighter at large and a researcher's dream, proceeded to assign bodies to cars for the four hour drive from Johannesburg to Bloemfontein. Match kick-off was at 4 pm; it was just after 11 am.

"We must hurry. You, you, and you, go in that car," Kingpin distributed seventeen comfortably into four cars. I was assigned the car with my husband, our oldest son, Kingpin's young son, and Tim the driver. The Nissan Crew Cab seated us comfortably; I had ridden in it a few times with Tim, when he had taken me to the vegetable market in Yeoville, a densely populated community of immigrants and refugees.  Tim, a small framed refugee from the Democratic Republic of Congo, whose lifelong struggles were etched on his face was Kingpin's point man, assigned a variety of duties, from creating intense paintings, to supervising real estate development projects and chauffeuring guests around town.  I found him a far more engaging conversationalist than the young bureau chief; though I looked forward to the opportunity to press her on her statement:


"All news is political. Everything you see on TV is very deliberately selected for the viewing audience."

When the opportunity presented itself the following week, I was not surprised by her pure corporate response. 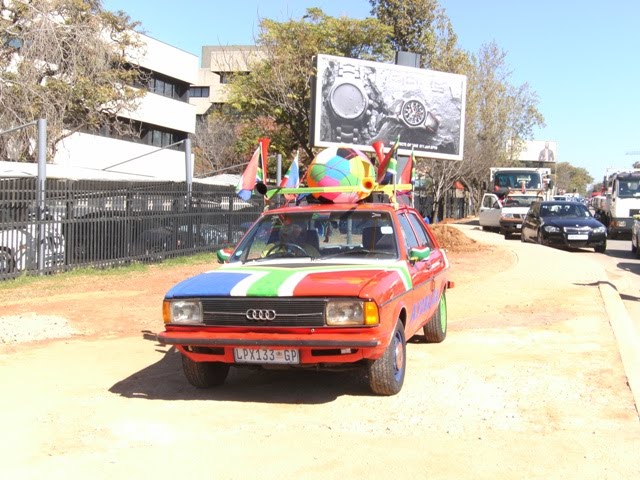 (Photo taken by Mama Shujaa in Sandton City, June 10, 2010, during Pre-World Cup Bafana Bafana parade)
Anyway, each car tailed the other through boundless grasslands and toll booths to the City of Roses. And just over three hours into the trip, not long after we'd left a petrol station and several restrooms, the Nissan Crew Cab's clutch failed and the car rolled to a complete stop by the roadside. It was only later that Tim admitted that it had become harder to shift gears in recent days; and consistent with his infinite ability to operate under continued difficulty or challenge, he had procrastinated reporting the matter to Kingpin.

As a result, we became stranded on the N1. Tim alerted Kingpin via text message.  Kingpin made a u-turn, and arrived within minutes to pick up his son and our older son.  They joined the bureau chief, a sexy Italian film maker, our younger son, and his daughter; and after he finished wagging his finger at Tim, Kingpin and his six passengers took off, kick off was at 4 pm.

My husband and I stayed with Tim, all of us feigning unconcern with the clock as we discussed our options. And that is when it became increasingly clear to me that I should have used the restroom during our stop at the petrol station.