September 02, 2009
I received these oldies from a friend recently. Take a look at some of Africa's matunda [fruits] of independence and the interesting headlines. 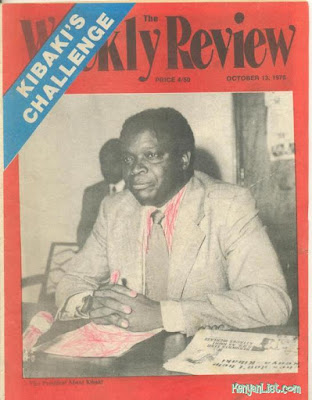 Current President of Kenya, Mwai Kibaki, pictured above, two years before he was appointed Vice President by Daniel Arap Moi who had just taken over the Presidency, following the death of founding President, Jomo Kenyatta in August, 1978. Kibaki has over thirty-one years of experience in politics, as cabinet minister, Vice-President and then President. 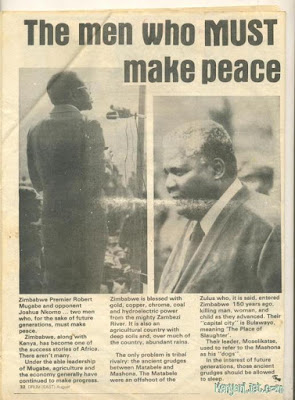 "Zimbabwe, along with Kenya, have become the success stories of Africa. There aren't many?" - a quote taken from the above article, click the snapshot to read in its entirety. President Robert Mugabe today at the ripe old age of 85 is still going strong after 29 years in public office, having served as Prime Minister, then President.

"Kibaki’s Challenge" and "The Men Who Must Make Peace." Here we are in 2009 and Kibaki’s challenge seems to have multiplied, while Mugabe has not made peace but is following the path of other despots.

Kibaki and Mugabe are by no means the oldest and longest-serving African leaders. See Reuters FACTBOX: Muammar Gadaffi of Libya seized power in 1969 and is still going strong. The late Omar Bongo of Gabon ruled for four decades before his passing in June this year. On August 31, His son Ali-Ben Bongo declared victory in the presidential elections. It's a long list or rulers - President Biya, at 76, has ruled for 29 years, Santos of Angola, has ruled for 30 years, Museveni of Uganda, has ruled for 23 years.

Kweli, tell me, are the matunda green, ripe, overripe, or preserved? Marmalade?