This Is Not My Africa 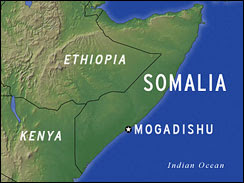 A thirteen year old girl was stoned to death before one thousand spectators in a stadium in the southern port of Kismayo, Somalia.

On October 27, 2008 Aisha Ibrahim Duhulow was stoned to death by members of Al-Shabab. What did Aisha do? In breach of Islamic law, she had committed adultery.

The truth is that Aisha was gang-raped by three men. When Aisha attempted to report this to the Al-Shabab, they accused her of adultery, and detained her. None of the three accused men were arrested.

It all began in August 2008 when Aisha traveled from a refugee camp in Northern Kenya to Kimayo, and was held there against her will by the militants. As the days went by, she grew distressed and it was reported that she became emotional, or mentally unstable.

According to an anonymous informant, BBC news reports that Aisha begged for her life saying "Don't kill me, don't kill me!" A few minutes later, more than 50 men pelted her with stones until she died.

It was reported that inside the packed stadium, Al-Shabab members opened fire when some of the witnesses to the killing attempted to save her life. A bystander, a young boy was shot dead in the confusion. It was reported that an Al-Shabab spokesperson later apologized for the death of the child, and said the militia member would be punished.

Aisha Ibrahim Duhulow. May Her Soul Rest In Perfect Peace.

This is Not My Africa
By Hana Njau-Okolo
In My Africa,
Children are treasured, not obliterated.
The community is entrusted to raise a child,
Not enlist a soldier, or a sex slave.
Children are not hunted down
For being witches or wizards,
Then sold into servitude, or killed.
Politicians are charged
With educating the continent,
Not suppressing a populace.

This is not my Africa.

The Africa that harbors
Power hungry warlords,
Dictators and presidents for life.
The one that ignores
Human rights atrocities,
Famine and disease
Because foreign interests,
And their government-driven
Projects are more important,
Or their private sector wants
A source for raw materials.
The Africa that continues to ignore the
Un-educated masses.

This is not my Africa