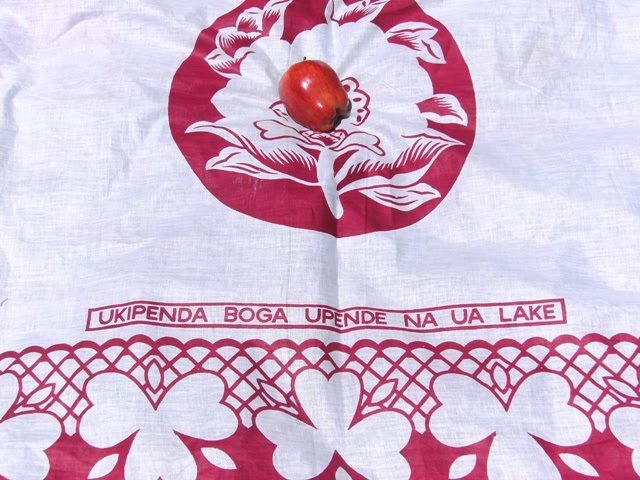 (One of my Kangas bearing the Kiswahil saying:  Ukipenda Boga Upende Na Ua Lake [If you like the pumpkin you must like it's flower].  Photo:  Mama Shujaa)

I am a junkie for people's faces. Last week I came across one that belonged to a woman. I had seen something in her face, somewhere before. I will call her Kisura, because I hold on to the hope that the content of her character will one day resonate with the Kiswahili meaning of her name: pretty, beautiful.

Kisura: the inconsiderate woman. I awarded her an All Star in Bad Behavior that day. In retrospect, however, I accept that social signals sometimes wrongfully indict a human being. An apple is not always rotten to the core.

There was a steady downpour of rain that morning. With every stop on our bus route, I prepared to receive a wet seatmate or, at the very least, collect a few drops of water from umbrellas, raincoats or book bags. Thankfully, a conscientious school girl took the seat next to me at Jimmy Carter Boulevard, the heaviest and most interesting loading stop on the route, where I routinely lift my eyes from the book in my lap to scrutinize faces and analyze bodies. Over fifteen people, a mix of white and blue-collar members of Atlanta's working class piled in.

Kisura was one of them. She did not sashay onto the bus, as was to be expected from her bendable mannequin body, which featured a soaked, fitted, zippered black raincoat, and a pair of skinny jeans, poking out from underneath. She carried six black bulging satchels, three on each shoulder and no umbrella. Her multi-racial hair was pulled back in a tight mass, the size of a pony's tail. Her glistening face was the color honey with barely visible lips wedged below her button nose; she was the perfect candidate for lip augmentation.

Planting one foot in front of the other, she crafted her way past the non-English speaking passenger engaged in sign language with the flushed bus driver. She slapped her magnetic MARTA smart card against the metered fare pad, emptying one ride's worth of the card's stored value; then dumped all six bags in the seat directly in front of me. It was marked RESERVED for the ELDERLY and HANDICAPPED. Next she began her solo in the now crowded bus.

As the bus lurched from the curb, she coughed several times, then squeezed her way back to the front of the bus, and made a spittoon out of the garbage back conveniently located at the door. She ejected phlegm, saliva or whatever other substance from her mouth.

For the rest of the ride to the final destination, there was no regulating Kisura. She coughed and spat to her heart's content.

It was revolting! No matter how hard I shoved my head into my book, or craned my neck towards the window, I could not escape her coughs, I visualized her lips pursing, gathering up the mucus, expectorating. And when she tired of the spittoon, she plucked a bus schedule (printed on glossy magazine-type paper), spread it open in earnest and used it as a receptacle. Ugh! Her actions stayed with me for the rest of the day, the week. Kisura, the inconsiderate woman will learn one day, maybe even the hard way. I just could not continue to suffer the memory alone. I had to share the misery with you on this beautiful day - Mothers Day. Am I the inconsiderate one today? Eh, kweli?