November 05, 2009
Image One: The lovebirds are holding hands.   She is a head taller than him, and attractive, her skin is a rich dark brown.  She has a figure that is model material, not runway thin but unique, shapely, African.  She leads the way, her pointed chin tilted slightly upwards, as if proclaiming her innocence.  Blood is smeared on her left breast.

His eyes are downcast, praying for the ground to open up, swallow him whole.  Blood is trickling down his chest, beginning right below his heart, continuing down, little rivulets meander through to the creases in his groin; the source of his agony.

In the background, a dozen men, fully clothed, young and old, on foot, and on bicycles, advance towards the naked couple. On their faces is a sprinkled mix of scorn and pleasure, like a herd of hot, hungry, hyenas hankering for leftovers.

Image Two:   A hooligan is facing the lovers, his back is to the camera and the club in his right hand is raised.  It is freshly carved, and lacks attention to detail; unfinished, as if its’ practical use is wholly contained in the jagged, barbed infliction of suffering. 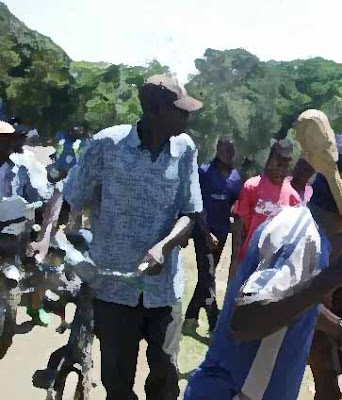 We are not clear whether he is at the beginning or the end of a strike.  But barely visible behind the hooligan is the figure of the man, stooping, shielding his groin area, one hand upturned, to summon God’s mercy.

She joins in the plea, her hand upturned, her face contorted in pain; her lips drawn out pencil thin, in a grimace that makes you fear for her safety.

In the background, more men, fully clothed, on foot, and on bicycles, advance towards the naked couple. On their faces is a sprinkled mix of scorn and pleasure, like a herd of hot, hungry, hyenas hankering for leftovers.

Images Three, Eight and Nine:  We see the back view of the lovers still holding hands. Blood oozes from a variety of gashes on their backs; swollen welts, dark pockmarks here and there, all evidence of the smorgasbord of torture inflicted by the mob.  The depression of the twin dimples above each of their buttocks can easily be mistaken for scars.

In the background, fully clothed men pause in their motorcade of piki-pikis, many glancing over their shoulders, their looks urging the barefoot, naked couple to carry on with the procession through town. 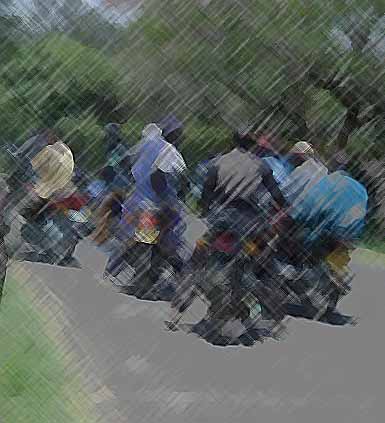 Image Four, Five and Six:  A series of close-ups showing the steps leading to the couple’s public embrace. Image Five reveals a gash on the man’s scalp, the clotting blood melding tufts of his short salt and pepper hair.  His lips are pursed in a kiss as he plants one on her cheeks, in justification of the spilled blood, a forced embrace that reveals some...regret? Sweat is rolling down from his neck to his shoulder and upper arm.  He is grasping her elbow as she cradles his chin in her hand. 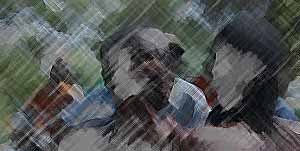 Image six follows her line of thinking as she strokes his cheek, his mouth is open, the fully gray hair-line now clearly visible.  She could be his daughter.

Image Seven:  The woman clambers head first into the back of a white Toyota Corolla, followed closely behind by the man old enough to be her father.  Someone has come to their rescue.

When I received these images, I wished I had a RETURN TO SENDER option.  Then after looking at the offensive images, and giving it some thought, I thought I would lend my voice to articulate what I perceive to be the prevailing winds of our time.  Because captured in these nine sinister images are symptoms of poverty, lawlessness and a total breakdown of family values.

The images were sent as an email FWD and included the following message (I altered them out of respect):


“This couple, a father-in-law and his daughter-in-law, were caught doing some cha-mama-na-cha-baba in Kisumu by bodaboda people.  They were beaten senseless, undressed and then made to kiss in public.  Kweli mpango wa kando una mambo!” [Translation:  Having a side piece will always cause problems].


I am not condoning adultery but in this case, the crime does not fit the punishment.  The sadistic treatment of these two ordinary people hurts my soul. Had they been “of substance’ in Kenyan society, the mob would not have violated them this way.  The stripping, beating and parading diminish not just the two, but Kenyans, Africans and humanity.