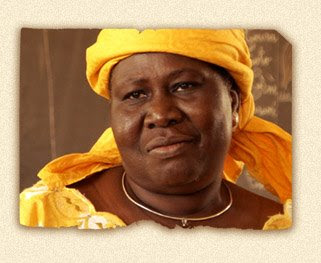 Last Thursday, I went with two lady friends to view the documentary, A Powerful Noise, an engaging recounting of the lives of three women who overcome hardship to effect change in their communities.

Bui Hanh is an HIV-infected widow who starts a self-help group that provides prevention information, support, counseling and health care to HIV/AIDS sufferers in Vietnam. I was surprised to learn that Vietnam has an extremely high rate of HIV infection due to the large numbers of men who use intravenous drugs. In one of the scenes, Bui visits a coal mine to distribute condoms. I found it odd that she had to warn the men “Do not wash. Use only once.” Could this too explain the high infection rate?

Jacqueline Dembele fights forced labor and the exploitation of girls who work in the city of Bamako, Mali. She started an organization that provides the girls with a basic education, teaches them how to become seamstresses, and places them in safe jobs. In a male-dominated society where young girls are sought after for marriage and other sexual fantasies, Jacqueline maintains her focus and dignity in a culture that is somewhat dismissive of women’s issues. She believes that “being poor is not an illness.”

Nada Markovic is also a widow and a mother of three, who survives the three year war in Bosnia. Her women’s association helps ease conflict between Serbs and Bosniaks. Under her leadership, the group is reconstructing communities and helping families support themselves through agricultural cooperatives. The remarkable thing about her is that even though the war was a conflict between two ethnic groups, her organization does not discriminate, a testament to her humanity.

A characteristic that all three women share is persistence. They don’t take no for an answer. They find ways to get around local governments, to fight the social stigma around HIV/AIDS and work to change perceptions about the importance of girls’ education.

My friends and I felt that the documentary was powerful. I wondered quite a bit about the title of the film: A Powerful Noise. According to Webster’s Dictionary, the definition of noise is “sound that is loud, disagreeable, unwanted” or “a loud, confused clamor or commotion.”

Perhaps the producers chose this title because historically, women have been considered to be somewhat irrelevant, brushed aside as inconsequential noisemakers.

Bui, Jacqueline and Nada demonstrate their incredible power as they become the glue that holds their communities together. Powerful irritants, they get noticed, they change lives, they empower girls and women. They are handling societal woes that most politicians would rather shove under the rug.

All three women are saving lives and preventing others from going down the wrong path; they are laying the foundation for the future; they are healing wounds from the past. All are paving the way for a better tomorrow.